Long before we became founding partners of daVinci Consulting, our paths had crossed several times. In the fall of 2004, we met for dinner to catch up. We shared a bottle of daVinci wine and talked about our work. The conversation shifted to a discussion about Leonardo daVinci.

We were intrigued by daVinci’s approach of digging deep into anatomy so he could paint exquisite human forms. How brilliantly he combined art and science! What if we made a hypothesis using daVinci’s approach? We asked ourselves, “If we dissected the behaviors of successful leaders at a deep level, would we be able to paint a picture of what success looked like? Would we see all the parts of the masterpiece?”

Pondering these questions excited and inspired us. We sketched out a research plan, sold the idea to Jones & Bartlett Publishers, and signed a contract to write a book. Voila: we became daVinci Consulting and we were on a journey to uncover masterpieces! 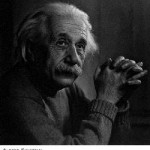 Einstein to Karsh...
“In art, and in the higher ranges of science, there is a feeling of harmony, which underlines all endeavor. There is no true greatness in the art of science without that sense of harmony. He who lacks it can never be more than a great technician in either field.”